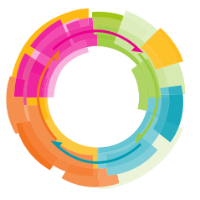 TARGIT 2019 update 4, according to the release notification, is primarily a maintenance release, fixing a number of known issues. However, a few new features and feature improvements did enter the release as well.

The new features include:

The idea with multiple layouts has been supported since the initial TARGIT 2019 release, even making layouts specific for mobile platforms.

However, until now, these layouts have worked as "full screen" layouts, so most things you designed still needed to be crammed into the size of a PC screen or a Smartphone screen.

The new thing is that you can now make layouts designed for scrolling, and this is especially useful for Smartphone users who can now examine each individual object in detail before scrolling on to the next objects.

Fit to page width in an example: A Dashboard designet for a long, scrolling Smartphone layout:

The Object Toolbar, the toolbar you see when you hover or click an object, has seen two small, yet significant changes:

The first change adresses the issue of end-users complaining about the toolbar "getting in the way" of seeing the data or doing other things, such as sorting by columns. Now, if you don't move the mouse for 750 milliseconds (3/4 of a second) it will automatically disappear.